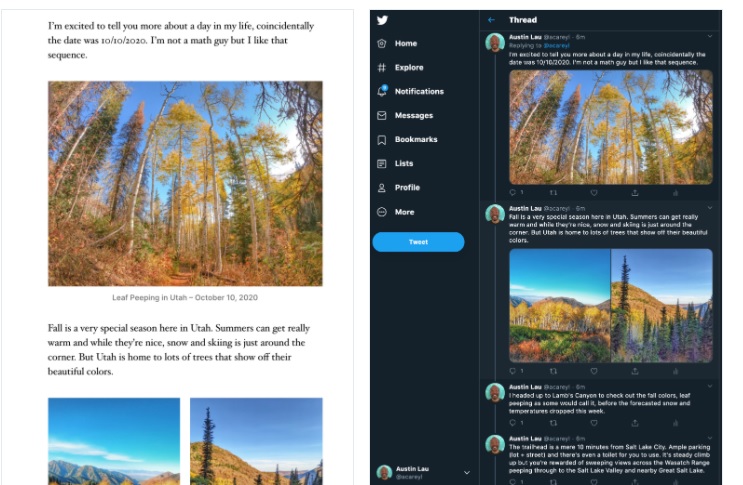 Fortunately, today, if you want to publish posts on a website, you don’t have to code that site from A to Z. There are a multitude of CMS that allow you to have your blog online. a few minutes. And the most used CMS is WordPress (but there are many alternatives).

And today, if you’re a fan of Twitter threads, now you have one more good reason to go with WordPress, but not any other tool. Indeed, Automattic has just launched a new feature that will allow you to generate threads on Twitter from your posts on WordPress.com.

In other words, instead of just sharing a link to your post on Twitter, you’ll be able to post all content as a thread (images and videos included). On the other hand, WordPress says it paid special attention to the formatting of these threads. “If a paragraph is too long for a single Tweet, for example, it will automatically be split into multiple Tweets,” the platform explains.

WordPress.com also includes a tool that allows you to preview the appearance of the thread that will be generated from a post, allowing the author to make changes before posting to Twitter.

To use this feature, you need to go to the Jetpack tab, then link the Twitter account to WordPress.com. Then, when posting to Twitter, the user will have the choice of sharing the post link on a regular tweet or generating a thread.

On Twitter, posts should not exceed the 280 character limit. And when a message cannot be expressed within this limit, users post “threads”.

These are linked tweets that must be read in a specific order. And while it used to be a DIY task to generate threads on Twitter, the platform later launched a feature that makes it easy to post.

But what would be the point of using this new functionality? According to WordPress, “Sharing your entire blog posts on Twitter is a great way to amplify your content, increase engagement, and build an audience for your work. You probably have a number of followers on your WordPress blog who are not following you on Twitter, and vice versa. This function allows you to access both groups. “